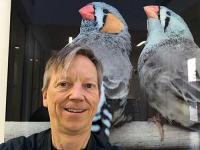 and Professor of Psychology

My laboratory is interested in vocal communication in both animals and humans.  We use a combination of behavioral, neurophysiological, computational and comparative approaches.  Our core hypothesis is derived from the principle that the auditory system uses computational schemes that are beneficial for biological organisms faced with the identification of behaviorally relevant sounds or sound features presented in a natural soundscape.  That core hypothesis leads to predictions on the type of feature detection that one can expect for representing natural sounds at the level of primary auditory areas.  We are interested in how these neural representations are in turn useful for 1) explaining the major auditory perceptual dimensions of timbre, pitch and loudness, 2) for extracting signals from noise, 3) for forming auditory memories and 4) for the recognition of auditory objects.   These four tasks are intertwined.  For example, the formation of auditory objects requires a memory that links a group of similar sounds (sounds from various chainsaws) to a semantic label (“chainsaw”).  Our behavioral experiments include perceptual acoustical behavior in humans (speech and music perception) and in birds (song and call discrimination).  Our neuro-physiological experiments include single unit recordings in songbirds and ECoG and fMRI recordings in humans.  Our computational approaches include encoding and decoding models for the characterization of the neural code and the formulation of biologically plausible algorithms for performing particular auditory tasks. My laboratory has described the functional organization of the avian auditory cortex analog and shown specialization for extracting features important for pitch, rhythm and timbre.  We have shown that this neural representation is useful for extracting signals from noise even when the signals are degraded because of natural propagation. We have also begun to study the transformations from sound to meaning both in songbird and in humans to decipher the neural code used for interpreting communication sounds (e.g. semantics) and for recognizing callers (e.g. voice perception).  Finally, we are also interested in the evolution of vocal and auditory communication signals.  We have studied animal communication in zebra finches, canaries, woodpeckers and the spotted hyena.