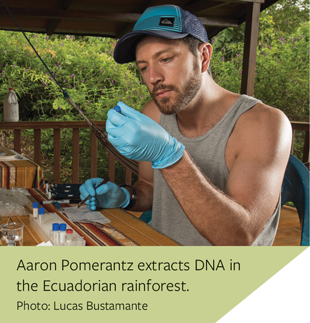 “throw it in a backpack and go anywhere,” according to Aaron Pomerantz, a PhD student in the Patel lab. A major breakthrough was the development of a nanopore sequencer (which is “about the size of a Kit Kat bar,” according to Pomerantz) that allows researchers to obtain DNA sequence from a sample in less than 24 hours, dramatically faster than the weeks or months it would take using traditional equipment. In addition to the nanopore sequencer, the main pieces of equipment are a centrifuge to extract DNA from samples and a portable thermocycler to amplify genes prior to sequencing.

Pomerantz first heard of the affordable, portable equipment when he was working as a field biologist before coming to Berkeley. It had largely been used for human health purposes, such as tracking viral outbreaks. He realized it could also be a game-changer for biodiversity field research, because it allows scientists to bring a mobile lab directly into remote areas.

Now at Berkeley, Pomerantz is improving and adapting mobile DNA sequencing for field research. He has recently 3D-printed a centrifuge at the Jacobs Institute for Design Innovation on campus, making the equipment even more portable and affordable. Pomerantz and his colleagues use the mobile lab to do DNA barcoding in the field, a method that allows species to be identified based on the sequence of just one or a few genes. They have developed primers (small pieces of DNA) to amplify ribosomal genes that are conserved across species for use in DNA barcoding. “You could take a plant, a fungus, and an insect, and use this same primer set to amplify the ribosome from each of these organisms. So you can go out and do broad taxonomic surveys and then sequence it on the nanopore sequencer,” he says.

Pomerantz uses this technology in his own research on the evolution of transparency in butterflies and has taught it to students in the Peruvian rainforest. He says that in many countries like Peru, samples previously had to be sent internationally for sequencing, which could take months. Now “you can start looking at your DNA sequences within minutes” of plugging the sequencer into a laptop, enabling scientists to make real-time adjustments to their research in the field. 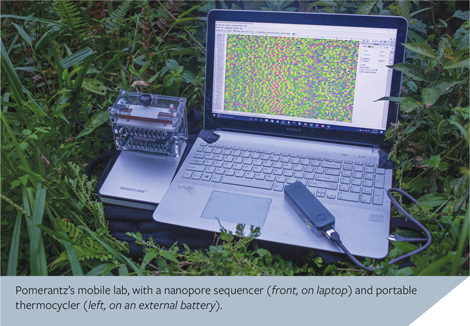 Starting this summer, Berkeley undergraduates will get hands-on experience with mobile DNA sequencing in a new field genomics course taught by Pomerantz and three other graduate students, all from different labs. Students will use the technique to investigate a wide range of scientific questions, such as identifying plants in the UC Botanical Garden. The goals of the course are both to teach students the technique and to expose them to different types of research in the department.

Pomerantz is excited by how portable sequencing technology is advancing both research and teaching. “These tools are making the barrier to entry lower, which is really important for teaching and for local capacity building in countries that don’t have the same scientific facilities. That’s what's really motivational for me.”