Holvis Delgadillo (BA 2008) excels at forging his own path, from attending 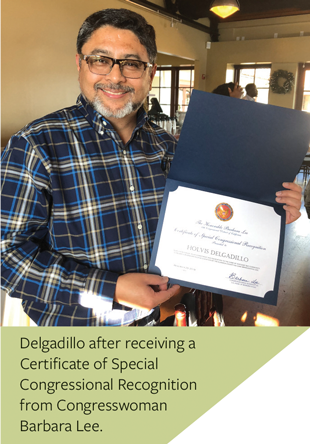 college as an older student with young children, to bringing innovative health care services to correctional facilities. Delgadillo is the Assistant Health Services Administrator at Wellpath, where he oversees health care in Alameda County jails. His work in HIV/AIDS care and prevention has earned him several awards at the county and state levels, and a Certificate of Special Congressional Recognition from Congresswoman Barbara Lee.

Delgadillo came to the US from Nicaragua when he was twenty. He worked as a janitor and then became a stay at home father. He went back to school during that time and earned an AS in Biotechnology from Contra Costa College. Afterwards, he transferred to UC Berkeley where he ultimately earned a BA in IB. Although juggling school and family responsibilities was challenging, Delgadillo says, “I had a lot of professors who really helped me” in IB, especially Tyrone Hayes, Daniela Kaufer, and the late Marian Diamond. “They encouraged me to never give up, to keep going.”

Delgadillo enjoyed being in IB, particularly because “you don’t focus on just one thing, there are lots of different classes that you take.” His staff IB advisor encouraged him to explore different paths, so he did research and volunteered in the Museum of Vertebrate Zoology. He appreciates that his education in IB prepared him for a number of possible career paths, including research, medical school, and public health.

His advisor also helped him define his career options. Delgadillo went on to earn a Master of Public Health from Touro University where he worked in the Contra Costa Public Health department on an HIV/AIDS program in a juvenile correctional facility as his capstone project. This experience launched his career in inmate health and, he says, “all that I learned about HIV and AIDS started there.” 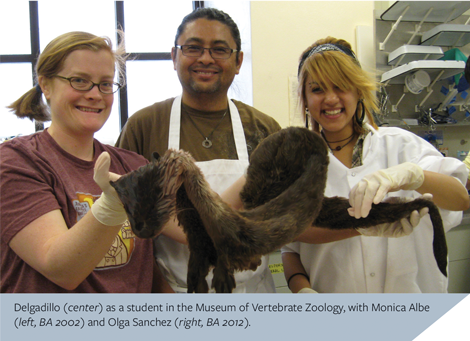 Delgadillo used that experience to improve and expand upon the basic HIV/AIDS services provided in jails. One such venture involves running one of the few HIV-specific testing programs inside a jail. “A lot of people come to the jail, so it is a great opportunity for us to offer HIV testing and to identify new positives,” he notes. The program also provides medical care and HIV prevention services. Delgadillo shares his expertise with the state of California as a member of the California Department of Public Health HIV/AIDS advisory board.

Delgadillo also runs other innovative health programs, such as one of the few transgender clinics housed inside a jail, and the only in-jail methadone program in the state of California. His work emphasizes the whole person, which includes making sure his patients have tailored medical, job, and social services once they are released. Some of his most satisfying moments involve running into former inmates who are doing well and volunteering to help others. “If you keep one person from coming back to jail, you did your job,” he says.