Betsabé Castro Escobar is a botanist interested in ethnobotany, ecology, evolution, and biogeography whose research often takes her to the Caribbean Basin. But since coming to Berkeley, a second passion has developed: creating a community with fellow Puerto Rican students and organizing hurricane relief for her devastated country.

A third-year PhD student with Paul Fine (PI) and Thomas Carlson (co-adviser), she studies human plant interactions and is interested in how humans promote evolutionary responses in culturally significant plants. “Through history, people have engaged closely with plants 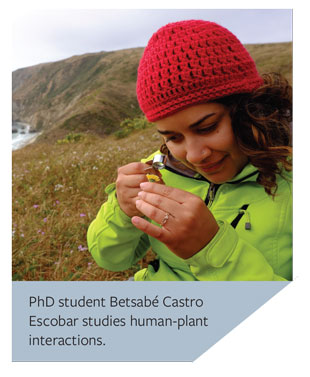 for a variety of purposes, from food to medicine to shelter and more,” she explains. “They’ve also selected certain plants for particular desirable traits.”

As a Latina woman of color in science, Castro Escobar is a strong advocate for promoting diversity within STEM fields in academia and beyond. Within the
Department of Integrative Biology, she serves on the IB Diversity Committee and represents the department in the Graduate Assembly. She has also used her project management and outreach skills to become active in graduate student affairs and departmental activities.

Castro Escobar was born and raised in Trujillo Alto, Puerto Rico, then earned her BS in integrative biology at the University of Puerto Rico. She later pursed her master’s at the University of Missouri in cultural anthropology to round out her education in the natural and social sciences. Once at Berkeley, she wanted to create a group to support its Puerto Rican graduate students, keeping them connected to their roots. Then Hurricane Maria struck the island, and the group became born of necessity. “It was a very emotionally charged time,” she remembers. “Most of us had no news from our families and friends. Those first couple of weeks were a silent wait.”

The term “Boricua” comes from the indigenous taino name for Puerto Rico, Borikén, and is used by descendants of Puerto Rican heritage. Thus the group named itself Boricuas in Berkeley (BiB). As news of the disaster’s magnitude grew, BiB’s purpose expanded to assist in hurricane relief. Since then, four trips have been organized to deliver more than 1,750 pounds of basic-need donations, and fundraising events have raised more than $12,000.

BiB representatives went down again during spring break to initiate an “alternative break” program for Cal student volunteers to work in affected communities. While Puerto Rico has made progress to repair the storm’s overwhelming damage, there is still much that needs to be done before the next hurricane season starts in June. “I think of our BiB work as a tiny effort,” Castro Escobar says. “The real heroes of this story are the Puerto Ricans doing the active community and grassroots work every day.” 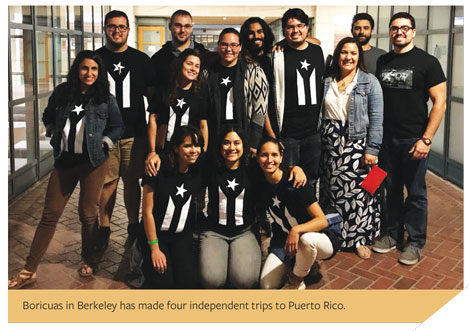 To learn more about Boricuas in Berkeley or get involved, visit the group’s Facebook page or email boricuasinberkeley@gmail.com.

Back to Main Spring 2018 Newsletter Page