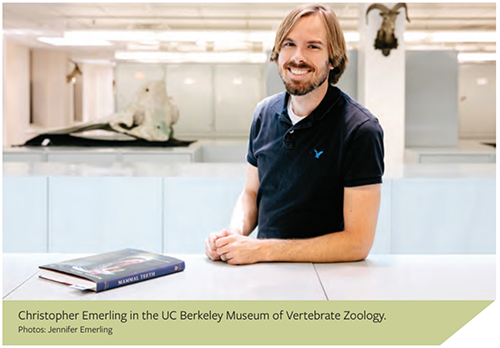 Christopher Emerling, a former post- doctoral fellow in Michael Nachman’s lab, made a recent discovery—his first grade journal. “Literally every single page was about an animal,” he says. The budding zoologist was writing about silky anteaters, pangolins, and Komodo dragons—the same types of “weird animals” that he is fascinated with to this day.

At Berkeley, the focus of Emerling’s research was the xenarthrans, a group of animals that includes sloths, anteaters, and armadillos. Emerling was drawn to the fact that despite being each other’s closest living relatives, these species are quite different. “You have anteaters which are specialized to eat ants and termites—so specialized that they don’t even have teeth. And their closest relatives are sloths, which only eat plants,” he says.

Emerling and his collaborators sequenced the genomes of these animals to understand how they diverged over the course of evolution. He looked at genes involved in a variety of functions ranging from digestion to sensory perception.

In a study on the genes for chitinase—an enzyme that breaks down the exoskeleton of insects—Emerling discovered that an early common ancestor of mammals likely ate mostly insects. When the dinosaurs went extinct, these early mammals began to lose their functional chitinase genes, indicating a shift towards eating plants and meat—niches that opened up once dinosaurs were out of the way. For example, within xenarthrans, the insect-eating anteaters and armadillos kept most of their chitinase genes intact, whereas plant-eating sloths now only retain them as broken gene remnants. 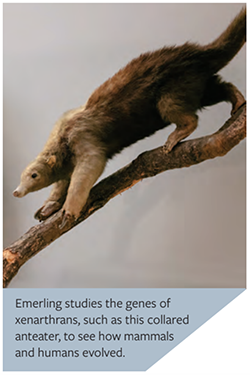 Emerling says that one of his most surprising findings was that xenarthrans do not have functional genes for making melatonin—a hormone secreted by the pineal gland. In fact, they do not have a pineal gland at all, yet they somehow have melatonin in their blood, perhaps produced by gut bacteria. “It’s just baffling,” he says.

“To me that’s the fun stuff.” Having access to diverse specimens was essential to Emerling’s research. Working in the Museum of Vertebrate Zoology (MVZ), he found all kinds of useful samples–including otherwise hard-to-obtain DNA from the naked-tailed armadillo, frozen by mammal curator and emeritus professor Jim Patton in the 1970s. “The MVZ was far ahead of its time in thinking, one day someone might need these,” Emerling says. He describes the MVZ as “an amazing fit” for his research on animal diversity because of its vast collection and the community of scientists with expertise on different types of animals.

Beyond research, Emerling enjoyed Berkeley because he was able to participate in numerous outreach activities to students from groups underrepresented in biology—something he cares deeply about. He visited schools, gave talks to teachers, and led tours of the MVZ. “It was fun, I got to watch kids’ eyes get wide as I talked about whatever weird animal I was showing them,” he says.

Emerling recently finished a second postdoc in France, and moved back to California to pursue his love of teaching as a visiting assistant professor at Whittier College. Ultimately, he would like to combine teaching with his research, which he summarizes as: “Using DNA to understand the past, and the past to help us understand DNA.”