In 1989, faculty members from several different departments at UC Berkeley joined forces to create a collaborative community of scientists interested in answering questions about biology at all different levels of organization—from molecules to ecosystems, and different time scales—from the earliest life on Earth to modern times. This community was the new department of integrative biology. Its members came from the departments of zoology, botany, paleontology, physiology-anatomy, and genetics that existed at the time. 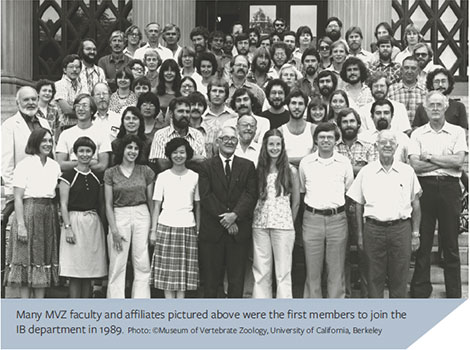 Many of these departments had long, illustrious histories, with some being founded a century beforehand. According to Marvalee Wake (pictured above), the founding chair of IB and current professor of the Graduate School: “Berkeley had reached the point that departments had originated and grown almost stochastically. This resulted in there being geneticists in several departments, and molecular and cell biologists in many departments.”

Wake says that this made it challenging for people outside the university to identify faculty doing similar types of work, and for researchers to share resources. In the 1980s, advances in science and technology increased the need for expensive shared facilities to carry out work such as advanced microscopy or research involving dangerous pathogens. This prompted many universities across the country to reorganize their biology departments, so that faculty with similar research interests were clustered together.

Berkeley was no different. In the mid-1980s, the campus underwent a massive reorganization of the biology-related departments, resulting in the formation of new departments that included integrative biology, molecular & cell biology, and genetics and plant biology—departments that still exist today. To accommodate the new departments, the Life Sciences Addition and the Genetics and Plant Biology buildings were constructed, and the Valley Life Sciences Building (VLSB) was completely renovated.

Wake, who was chair of the zoology department at the time, was selected to oversee the formation of the new IB department. She describes herself as a “cheerleader” and advocate for the effort, and describes her own research on the evolution, development, morphology, and reproduction of vertebrates as “highly integrative—it always has been, even before we started using the term.”

As part of the campus-wide reorganization, faculty members got to choose which of the new departments they wanted to join. Wake says, “The lines were pretty natural for most people,” based on their research interests and approaches. Because the department was new, a few faculty were, according to Wake, “concerned they were going into a department with a weird name rather than [something like] plant biology.” However, the integrative 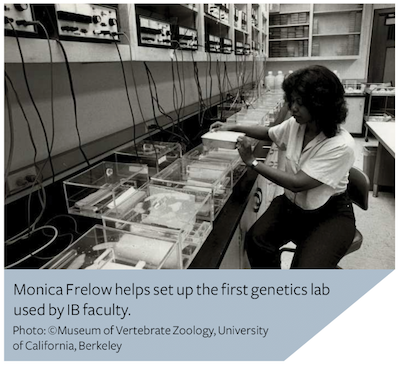 Most of the founding faculty came from the original departments of zoology and botany, with about two-thirds of their faculty members choosing to join IB. The entire seven-person paleontology department joined, as well as two faculty members from physiology-anatomy, and one from genetics.

Then, as now, Wake says that what defines the IB department is “an attitude of how to do the science of biology. To be able to think in terms of big, broad questions and parse them out . . . We are training students to be centered in one or more components of the sub-disciplines, but to think in terms of the organism and how it fits whatever the big questions are.”

Because VLSB was being completely renovated to provide new labs and shared facilities for all of these scientists, the new IB members were temporarily housed in nine different buildings on and off campus. Ultimately, the complex process of creating the IB department took more than five years.

The name integrative biology was developed over the course of three faculty meetings in which the new members debated the types of names that were being used elsewhere in the country for similar departments, such as Harvard’s department of organismic and evolutionary biology. Wake says some faculty “objected to the kinds of names that named parts of biology” such as ecology or evolution, which they might not be personally doing. “We needed a name that represented a way of doing science, rather than the parts of it.” In order to move the process of choosing a name
along, Wake told the faculty that she would step down as interim chair if they didn’t agree on a name by the third faculty meeting. Her plan worked. “They tell me I’m responsible for the name integrative biology,” she says, laughing.

While Wake was a big believer in the new department, she found its formation to be bittersweet. In 1988, Wake had organized the 100th anniversary celebration for the zoology department and then dismantled zoology the next year as its members moved to IB and other new departments. But she says that the reorganization was necessary “both philosophically and pragmatically” to advance science in this field. 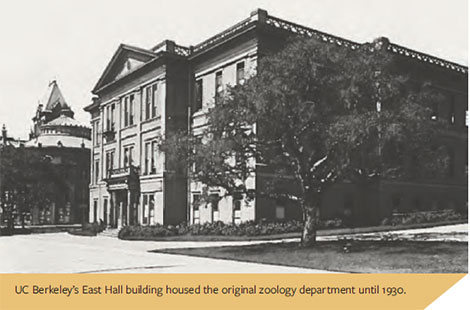 departmental seminar series, and committees where representatives from the different original departments worked together. The museums and natural history reserves associated with IB also helped build collaborations, train students, and provided resources to support the integrative type of biology that people were doing—and still do to this day—using approaches ranging from molecular biology to ecology and paleontology, just to name a few.

Wake sees this ability to easily collaborate and share resources as one of the strengths of IB, leading to many advances in scientific knowledge: “For example, our evolutionary biologists work together on topics like climate change . . .Our paleobotany lab is interested in how seeds are transported, so they have looked at the way seeds with wings fly, and some of our biomechanics scientists are interested in flight . . . The behaviorists can interact very directly with ecologists . . .we have people looking at gut biota as a community ecology situation. There are lots of interactions. Having people accessible to each other really helps.” Over the last thirty years, the department of integrative biology has facilitated collaborations like these, bringing together expertise, resources, and approaches from numerous fields to extend the boundaries of our knowledge about life, and continues to be on the forefront of biological research today.