The deserts of New Mexico were not always dry and desolate. 74 million years ago, they had forests teeming with plant life and a humid, tropical climate. Dori Contreras, a graduate student in Cindy Looy’s lab, characterized the plant diversity in one of these forests by, as she says, “building a forest from fossil leaves.” 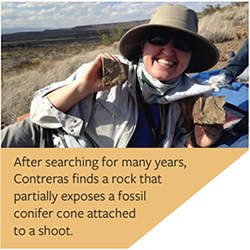 Contreras, who recently completed her PhD, is fascinated with prehistoric plant ecosystems and their evolution, particularly tropical forests. She has always loved plants and being in the woods, but it was not until her twenties that she discovered her love of science. Contreras went to work right after high school, but started taking distance- learning courses, intending to get a degree in art. But two unconventional biology classes—based on David Attenborough’s television series, The Living Planet and Life on Earth—were “game changing” for Contreras.

“It’s David Attenborough’s fault,” she says, laughing. “[The series] made me see the interconnectedness of nature in a way I hadn’t been exposed to before. It was my first introduction to ecology and changed the way I viewed things. It made me fall in love with biology."

Contreras went on to study biology at Texas State University, where she “devoured” plant courses and developed an interest in paleobotany through courses and research. She knew she wanted to combine her interests in tropical ecology and paleobotany in graduate school.

“I dug my heels into both of those subjects and didn’t want to let either of them go,” she says. Berkeley was the ideal place for her, because of the combination of the plant researchers and the paleontology museum (the UCMP)—a resource that, she points out, is not common at universities.

Contreras’ graduate work focused on describing a fossil forest from a site on a ranch owned by media mogul Ted Turner, near Truth or Consequences, New Mexico. The forest was preserved in a volcanic ashfall which later turned to dense, hard rock, and dates back to the Cretaceous period. Angiosperms—flowering plants—evolved during this period, and the fossils provide a window into the transition from conifer and fern-dominated forests to modern-day angiosperm-dominated forests. 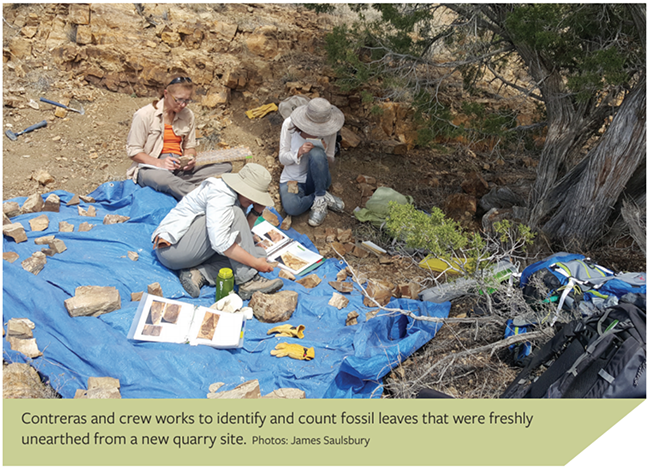 Over several years of field work, and with the help of several assistants each trip, Contreras pried large blocks of rock layer from the ground and hammered them open to expose the fossil leaves. Most of the leaves were identified and counted in the field, but her team brought some exemplar samples back to the UCMP. After one particularly long trip, their SUV was so loaded with heavy rocks that “there was an inch between the tire and the wheel well,” laughs Contreras.

After analyzing the morphology of the leaves to classify them into species and determining their relative abundance, she found that: “It’s an extremely diverse forest—it’s looking to be one the most
diverse fossil floras that we know from any single deposit.” It was abundant in flowering plants—mostly new species—providing evidence of angiosperm dominance nearly 10 million years earlier than previously demonstrated, and giving insight into the evolution of forests in warm, wet climates.

Contreras is staying at Berkeley to do a postdoctoral fellowship on a multi-institutional project with Cindy Looy and Carl Rothfels, which will use fossils and living plants to reconstruct the relationships and timing of evolution for vascular land plants. In the future, she would like to work either in a museum or academic setting—wherever she can continue exploring the evolution of past plant ecosystems.